RIDE FEE  is  $60.
It is refundable if you bail out prior to September 9
OR you can assign it to a friend.


SCHWAG AND PERKS FOR FINISHERS:


Let me know of you need area lodging. I can help. 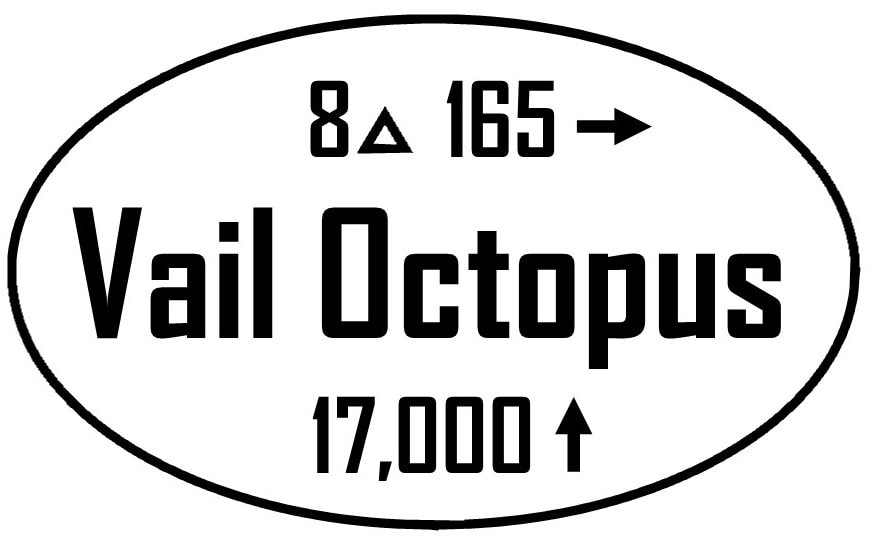 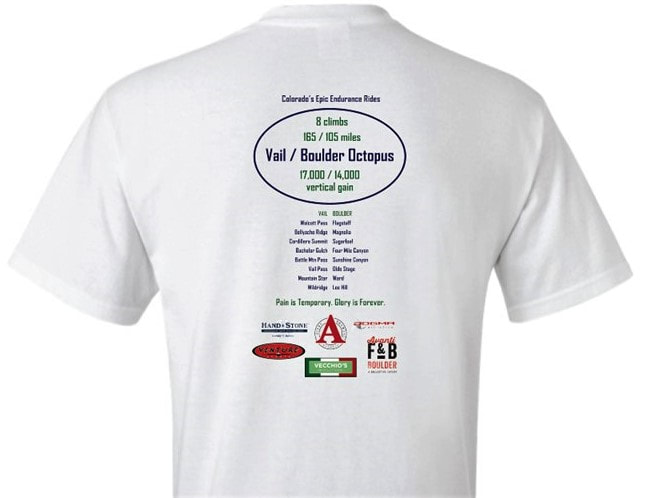 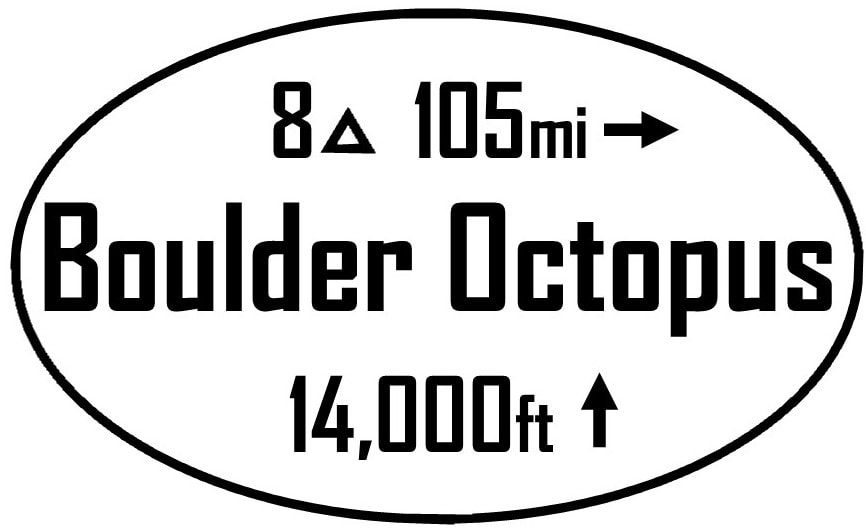 PREVIOUS RIDES
The seventh VAIL OCTOPUS was Saturday Aug. 24, 2019
scroll over and click to enlarge images​

This year's Octopus was a classic.  We had a starting group of 16 riders…a few Octopussy’s who showed up ready to kill it for half the day, a couple super strong vets, a few fearless rookies who didn’t know the roads, and several who did and knew what to fear.  Accordingly, there were casualties, struggles, perseverance and outright victories.  This year there is commentary that cannot be relegated to one-liners.  So if you want to hear more, CLICK HERE to get the a complete picture of the 2019 VAIL ride.

Each year as I tabulate the roster leading up the ride and then watch people bail out as ride day approaches, I wonder why I bother holding the event at all.  But after the ride, when all finishers sat down for beer & pizza and made their comments about a long, hard day in the saddle, I was reminded of why I bother with it....and I thought, ‘yep…gotta do this again’.

I want to thank Mike Brumbaugh / Venture Sports for his continued support!  He came through with a wonderful van driver, Catrina DeCosta, who was charming and on top of her game.

I want to thank our new sponsor, Adam Avery / Avery Brewing for donating the reward-beer.  I haven’t felt like Santa Clause since my kids were young and innocent…a long freakin’ time ago.   It is truly a joy to hand weary, exhausted adults a six-pack of great beer.

...and it was PERFECT.  Octopus history was made.
All 14 riders who started the day, finished the ride.  A first!
As always, morning weather can make or break the mindset for an all-day ride. But once again, it was a blissful September day in Boulder.  We just had to worry about the legs.

Fourteen riders, 8 Octopus rookies, 4 countries represented, 1 female soloist-repeat-rider, an age range of  28 to 59.  And a guy who just moved here from Florida…which, upon last check, is not only flat but somewhat under water.

Every year the ride has an underlying theme. This year that seemed to be patience and perseverance.  Two-thirds of the group rode a strong pace and there was the back one-third that rode at a more measured pace. And if one group is not patient and the other group does not persevere, the day is much less awesome.  But gritty riders merged with great minds and the day was indeed absolutely   awesome  <>  Nico ‘the Tabulator’ Toutenhoofd gets huge kudos for pacing and patience; and for not saying, ‘hmm, no one has been struck by lightning today’; and, from what we observed, not actually breaking a sweat.  <> In response to last year’s world-class bonk, Ken Dammen effectively stood atop Lefthand Canyon near the end of the day and said to it, ‘fuck you’.  Last year, it got the best of him. This year, he flattened out 15K feet of climbing. That is a comeback.  <>  Lefthand Canyon did indeed take its’ toll on some others this year…it received the contents of one man’s stomach; the echo of bloody screams from cramped legs; and the lactic acid dripping from a man’s thighs.  But each man battled and finished the day. Grit. Perseverance. <>   Our annual soloist, Erika VanMeter, started just a bit early and we did not catch her until the beer & pizza at Proto’s.  She had supply-support but she grinded it out solo all day long and that is much more difficult than rolling with a pack. Grit. Perseverance.   The guy from Florida!?...he bikes up a hill like he’s being chased by a goddamn gator.

And once again, the ride is not possible without the Man In The Van… Ryan, owner/mechanic at Standard Bike Repair in Boulder chased us around all day long. Thanks Again!!
The sixth VAIL OCTOPUS was Saturday Sept. 9, 2017

We started the day with 10 riders planning to complete the ride and 4 riders with a Half-Octo on their mind. Two records may have been set!  At 12 years old, Toby Scarpella may be the youngest biker to ride Wolcott-Bellyache-Cordillera. That alone is 6000 ft vertical gain over 50 miles. Congratulations Toby!   At 61 years young, Patrick Baldasare finished his second Octopus.  [ I notice a commonality...lo spirito Italiano! ].  As always, I commend the starters who accomplished one of the hardest things about the day: they showed up and tried!

Huge gratitude goes out to Tyler Greider for managing the van operations so perfectly and Mike Brumbaugh at Venture Sports for another year of donating the van and supporting the ride.  For the 7 survivors, a perfect blue sky and a fitting sunset at the end of the ride always helps.

2017 FINISHERS:  Mark Lowe, Patrick Baldasare, Matt Shapcott, Mike Sherven, Mike Glass, Dorf, Bandoni.
OCTOPUS TRUTHS
​
These rides are tough but they are not as tough as they seem on paper.

You will not show up to ride without committing to it much in advance.

It's also a helluva lot of descending!
​
I do not recommend these rides solo or duo. These two young lads did it on their own which is much more difficult. The group ride is painful ​but not as painful as this.  Have a look... THE VELO VEGAN
​We appreciate the support and contributions from the following people and their businesses...
Mike Brumbaugh, Dave Ivener, Adam Avery, Jim Potter, and Travis Christ

PAIN IS TEMPORARY.  GLORY IS FOREVER.